The Messages and Alarms functions 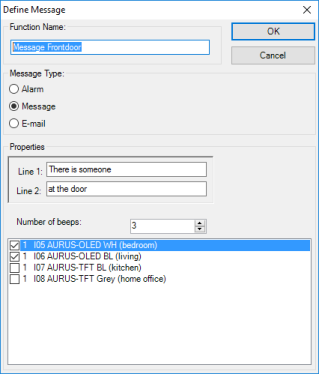 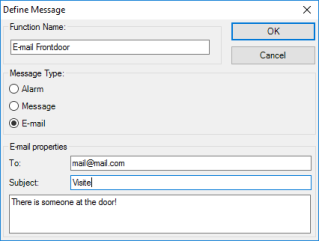 Name
Introduce here a suitable short reference name for the real display text which is to be entered below in the 'Data' field. Due to the short 'name' when working in PROSOFT, you should be able to quickly find back the text message you are looking for.

Data
Here the text message is put in which will be announced when a certain situation will have occurred or at a certain moment. The text message can contain no more than 2 text lines ('Line 1' and 'Line 2') of 16 characters each. It is recommended to keep the text messages short and concise.

Alarm
Choose this parameter when dealing with an alarm. When an alarm occurs, then the introduced text message will appear on the selected interfaces with display/GUI+ and all interfaces will beep with the preset number of beep tones.

An alarm always has to be switched off manually. Take care first that the cause of the alarm is taken away.
For the working of an alarm on the AURUS-OLED (TDS12022) or AURUS-OLED PLUS (TDS12032), see chapter 'AURUS-OLED'.

A message disappears automatically as soon as a new action occurs on the respective interface. A new action can be activating a function, receiving another message or alarm.

E-Mail
by activating this function, there will be sent an automatically e-mail to the predefined e-mail addresses.

This functionality requires a continue connection of the Central Unit with the internet and that the e-mail settings were correctly imported (see also 'Extra'-'Options'-'E-mail').

Data' (Messages/alarm)
here you enter the text message which will communicated when a certain situation will appear or on a certain moment.

Interfaces
Select here the Interfaces/GUI+ on which the messages have to be displayed.

Data e-mail
here you enter the e-mail that will be sent when occurring of a specific situation or on a specific moment.

Subject
contains the subject of the e-mail.

Message
the length of the message is restricted to 140 characters.

Short
With a short push the text message appears on the selected interfaces accompanied with the preset number of beep tones. When you push short again on the button, the message is sent again to the interfaces. The previous message is over written.

Long
The operation is the same as described under 'Short'.

A message cannot be switched off, it disappears automatically in the following circumstances: after a predefined time or by executing an action on the touch panel or by a new message/alarm.

Long
The operation is the same as described under 'Short'.

Long
the working is the same as described under 'Short'.

Function behaviour when operating in another function

On
The message appears on the selected interface with the accompanying number of beep tones.

On/-
The message is sent with the accompanying beep tones to the respective interface. When the function is switched nothing happens with the message.

An 'Alarm' can be selected in another function. When that other function is called the alarm functions in accordance with the target value:

On
The alarm is shown on all selected interfaces with a display/GUI+. All concerned interfaces beep the preset number of times.

Off
The alarm is switched off.

ON
the e-mail will be sent to all predefined e-mail addresses.

ON/-
the e-mail will be sent to all predefined e-mail addresses.

When switching off this function there will be no e-mail sent.
Since an e-mail cannot be switched off, a target value cannot be put in. The target value is indicated in pale grey to indicate the behaviour of the e-mail in the other function.
The status of an e-mail is always 'true (on)'. Therefore every function which only contains an e-mail will always be 'true (on)'.